Albemarle’s strong finish in Commonwealth District play just earned it a home game in next week’s tournament and with a thrilling 6-4 win over Riverbend on Friday, the Patriots are riding a wave good momentum.

Albemarle got a walkoff 2-run home run from Kristian Aason in the bottom of the seventh to break a 4-4 tie. Aason had a huge night finishing the game 3 for 4.

Jake Hendrix threw six solid innings but could not earn the decision. Timmy Aker picked up the win after his inning of relief.

Just like Aason, Joe Burris was 3 for 4. Hendrix, Joey Varaksa and Lee Carneal all had two hits. Geran Steljes picked up a clutch run early in the game, scoring from second after an error in the field.

Albemarle (12-7, 8-6) will face Stafford on Monday at 6 p.m. The fourth seeded Patriots split the regular season series with the fifth seeded Indians. 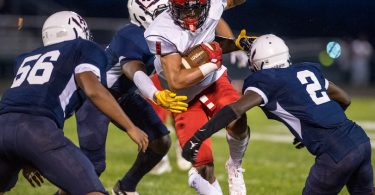