Staying undefeated in the regular season in any district is a challenge. It requires immense focus night in and night out.

Doing it two years in a row in drastically different districts? That just ups the ante a bit.

For the second straight year, once in the Commonwealth and now in the Jefferson District Albemarle High volleyball has put together an undefeated campaign, rolling 3-0 over Orange County Thursday night to wrap a 14-0 maiden voyage through the Jefferson.

Senior hitters Sarah Woods, Chelsea Woodfolk and Hannah Deal led the way for the Patriots, albeit this time mostly while setting up their teammates. It’s tradition at Albemarle for all the seniors on the roster to start, and while none had any setting experience, they rolled 25-12 in the first game. Woods finished with nine assists, Woodfolk with six and Deal with four on the night as part of Albemarle’s old school 4-2 offense approach without a true setter in the lineup.

Lexi Brown and Woodfolk each led the attack at the net with eight kills a piece with Brown also chipping in three blocks and five digs. Woodfolk had a big night at the service line too with five aces, finishing a leg up on Deal who had four. 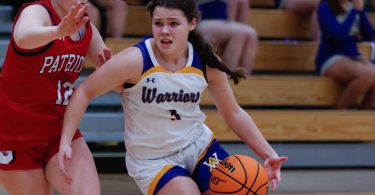 It took some work and some help, but Albemarle basketball is back control of the Jefferson District...