Briggs, the former Charlottesville and Covenant standout recently enrolled at Fishburne and joined the Caissons’ basketball team. In his first action Tuesday night he exploded for 30 points and 10 rebounds in a 65-63 victory over one of his old squads, Covenant. Briggs buried two free throws with 7.1 seconds left on the clock to help seal the Fishburne victory.

“It was crunchtime so I had to knock them down,” Briggs said. “I felt like we did good down the stretch, we played good defense and we fought.”

The game swung wildly back and forth as each team made long, sustained runs but never took control. First Covenant jumped out to an 18-5 lead before Fishburne broke back with a 14-0 run of its own to take the lead in the second quarter.

The teams traded baskets for a long before Fishburne pulled ahead in the third quarter with a 10-0 spurt. Covenant refused to go away quietly and took the lead with a 14-3 run of its own. From there the game see-sawed until Briggs hit the two free throws and a Covenant attempt rattled out to cap the Caissons’ victory.

“You’ve got to give them credit, they fought back and they didn’t give up,” said Covenant coach Travis Johnson. “We knew they wouldn’t and we just have to learn from this.”

The Eagles got a balanced scoring effort from Hernon Henderson and David Rogers each checking in with 13 points while L.J. Morris chipped in with 10. But the Eagles couldn’t string together key baskets to pull away from Fishburne in the second half.

The Caissons kept hanging around, with Briggs creating a number of second chance baskets with his aggressive work on the boards.

“Our guys kept their composure,” said Fishburne coach Cedrick Broadhurst. “I told them in the huddle that you’ve got to stay in it and we’ll have our opportunity but if you don’t we’re going to lose this game right here.”

Tyrone Mason finished with 13 points for Fishburne, the only Caisson outside of Briggs to post double digits. Briggs went 11 for 12 at the free throw line, including finishing off three-straight 3-point plays.

Fishburne will try and build on the momentum — the win ended a seven-game losing streak for the Caissons — against Eastern Mennonite Thursday. Covenant, who has lost three straight close games, will have to take on the VIC Division 2’s current leader Hargrave at home Saturday. 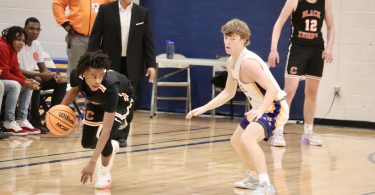