Things haven’t gone exactly as planned at Louisa County this year. But Friday night, Louisa got back on track and put itself back in contention for a playoff berth with a 27-22 victory over Powhatan at home.

“We needed that one,” said Louisa coach John Meeks. “I really wanted for our seniors.”

The defense closed it out for the Lions in the fourth quarter. Late in the final frame, with punter and quarterback Zack Jackson on the bench with cramps, Meeks opted to go for it while up five and facing a fourth and two on Louisa’s own 40. The Lions couldn’t convert, setting Powhatan up with a short field for a potential go-ahead score.

But the Lions’ defense stood the test, and forced a punt that pinned Louisa deep. The Lions moved the ball a little, but couldn’t close out the game, punting again and putting the pressure on the defense.

They held again and Louisa wrapped up the 27-22 victory.

“They made some big stops when we needed it,” Meeks said.

“He had a pretty special night,” Meeks said. “Even the little things, like taking a sack when nobody was open instead of forcing something, he did those well.”

Sophomore Trey Cherry took another step forward, hauling in a 61-yard touchdown pass from Jackson late in the first half that put the Lions up 21-9 going into the break.

“He makes big plays when he gets in space,” Meeks said. “He has great vision and he’s really looking good for us.”

The Lions had to adjust slightly when Powhatan decided to give the bulk of the rushing load to Stephen Hodges, a rugged back that was a departure from L.J. Jackson, a scatback who has been running well of late. Hodges got 29 carries and went for 107 yards and a touchdown.

“It was a little curveball and I thought (Hodges) ran the ball hard,” Meeks said. “But we thought they might do it because they did it in the second half against Fluvanna, and I thought out defense got some big stops.”

The Lions now face Charlottesville and Western in a two-game road gauntlet that will determine their playoff fate. Two wins and Louisa is in, but the margin of error is slim—a loss to either would likely keep the Lions out of the running. 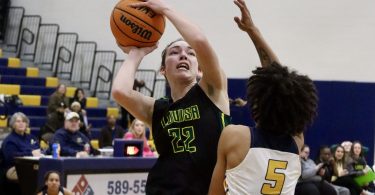 Louisa County girls basketball knew it was going to be in for a fight Friday night. With the...