It’s appropriate that a one-game playoff for the Jefferson District regular season title needed extra innings to come up with a winner.

Two extras actually that followed a bottom of the seventh rally by Louisa County.

The Lions rallied to tie the game in the seventh and then scratched out a run in the bottom of the ninth to top Powhatan 3-2 and secure a Region II playoff berth and the top seed in the JD tournament that starts Friday.

Powhatan built a 2-0 lead with runs in the third and sixth. But with two outs in the bottom of the seventh, Lindsey Talley and Hali Goad both singled for the Lions. McKenzie Riner drove both runners in with a two-RBI triple, forcing the game into extra innings.

After a scoreless eighth and top of the ninth, Morgan Kocolis led off the ninth with a walk and advanced to third base on a throwing error when Katie Harlow laid down a sacrifice bunt. Goad managed to drive in the winning run on a ball hit to the Powhatan shortstop.

The Lions and Indians both get first round byes in the Jefferson District tournament and will play in the semifinals Tuesday at Charlottesville.

A short memory is a great way to move on from a loss between weeks. Be a goldfish, right? Well... 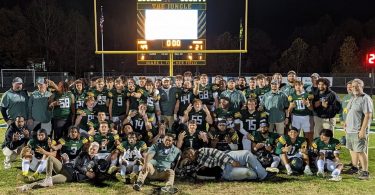 There was no letdown in The Jungle after last Friday’s Jefferson District game-of-the-year. After...