The final match score did not quite display that Madison County had to put in a good bit of work to take down rival William Monroe, but behind strong defense and a balanced approach offensively, the Mountaineers were able to get the job done relatively methodically with a 3-0, 25-15, 28-26, 25-20 victory.

“We weren’t quite sure what was happening on some of the calls that were made but as one of our players said, we earned our points on kills and we felt good about that,” said Madison coach Carol Nowakoski. “Monroe hung tough in those last two games, they were both close. Coming back to win at times, I think that showed our overall depth, team skill.”

The tension of the match was at it highest in the second set where the Mountaineers had to dig out of a five point hole with the Dragons leading 12-7 to start to set up a dramatic finish. Madison tied things up at 17-17 and then appeared to have won the game at 26-24 when officials reversed a call and gave Monroe a chance to even things back up. The Dragons battled back from match point twice before the Mountaineers took the 2-0 lead with a 28-26 win.

“We gel really well and the games that we don’t don’t come out and kill it right now, it’s the other team just picking up momentum,” said Madison junior Sheridan Santinga. “We didn’t have the same intensity as (Monroe) had when they made their run so we had to bring ours up.”

“When we don’t achieve what we want in a game we really try to come out in the next one and just knock ‘em dead,” Santinga said.

Madison’s strongest game came out of the gate where they rolled to a 25-15 win, and for Monroe, getting off to a slow start has been a bit of an early season theme.

“We were coming off a tournament on the weekend where we didn’t play very well, but picked up some wins,” said Dragons coach Ken Lawson. “We didn’t quite know what Madison was going to have for us and we feel like each game, it could have gone either way. But unfortunately we weren’t passing well from the back line and our best hitters were a bit off. It was a good game though. But (losing the first game) that seems to be what we do. We lose all the first games and bounce back a little. Unfortunately right now we don’t mind getting behind.”

On the night both Logan Coates and Santinga finished with eight kills. Santinga added four blocks. Kaitlin Aylor led the way defensively with eight digs, but Abigail Bowman and Lauren Seale had eight and nine digs of their own respectively. Setter Bailey Colvin finished with 15 assists.

“We’ve got a lot to pick from right now, a lot of people to work in the games,” Nowakoski said. “We didn’t what Monroe was going to be like at all because we hadn’t played anyone in common. So we got that first win pretty easier and then got two tough ones and we feel like that’s their true nature so it’s going to be a tough one in the district again.”

Madison improved to 7-0 on the year while Monroe fell to 3-2. 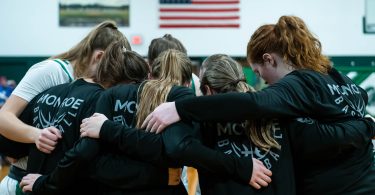 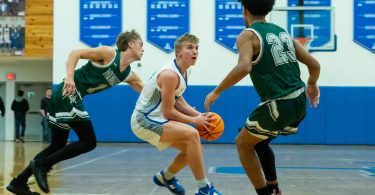