It was a tough draw to start for Miller as they had to play host to the defending VISAA Division 3 champs. Blessed Sacrament made it even tougher for the Mavericks as they put Nathaniel Settle on the mound who had his stuff for all seven innings. Behind a complete game from Settle and a 3-run rally in the top of the fifth with two outs, the Knights were able to pick up a 6-3 road win in the quarterfinals of the same tournament they won last season.

“I thought Nathaniel was throwing harder at the end than we was at the start,” said Blessed Sacrament coach James Poore. “He’s a junior and one of the five guys back from that state championship team. Those guys pulled everyone else with them today and we’ve got some clutch players. We’ve got a lot of experience and that helps.”

For the first four innings the game was nothing but a pitcher’s duel between Settle and Miller starter Eric Ponton. Through four innings the two stood tied as Blessed Sacrament tagged Ponton with a pair of runs, but so too did Miller to Settle. In fact, after four innings Settle had only given up two hits, but both were to Thomas Stallings and both left the yard in a hurry.

“Thomas had a heck of game and (his home run) in the fourth was just a bomb, he absolutely crushed that thing,” said Mavericks coach Sam Beale. “It’s been a great ride for Thomas. He came here as a freshman with one thought in mind and that was to play college baseball. He’s got a great scholarship to VMI and he’s going to continue to be a great baseball player.”

With two outs in the fifth, the Knights made good on an extra opportunity. After a runner reached base on an error, Gavin Paul drove a go-ahead run on a double that hit the fence in center field. In the very next at-bat, T.J. Dobrucky cranked a 2-run blast to make it a 5-2 ball game.

Miller wasn’t able to bite into the lead in the fifth, but cut the deficit down to two runs in the bottom of the sixth. Stallings drew a walk and stole second, then reached third on a strikeout in the dirt and finally plated on an RBI groundout from Joaquin Litzenberger.

Unfortunately for Miller, Settle put a charge in a ball in the top of the seventh for a solo home run to give himself a three run lead to work with in the bottom half of the last inning of the game.

“I felt really good today,” Settle said. “I really liked the mound here today, it falls in with what I like. I had the guys playing great defense behind me and so it worked out pretty well. That’s a good team we were up against and they’ve got a hitter going to VMI that was tough to get out.”

Miller was able to put runners on first and second with one out, but Settle earned the second out on his ninth strike out of the game. With two outs and representing the tying run, Stallings got up to the plate one last time and swung on the first pitch. The ball sailed into foul territory along the first baseline and the Knights were able to wrap up the win.

“Hats off to them,” Beale said. “They’ve got a tough pitcher and he had it all and he was consistent. At the end we saw he was breaking down a little bit, but he pitched a great game and pretty much shut us down.”

And while the loss was tough for the Mavericks to swallow,  Miller’s rise from a young and developing team into one of the top Division 3 teams was the lasting feeling for Beale.

“It’s be an amazing season, a lot fun,” Beale said. “For the last two years we’ve been fighting the cellar and we had a bunch of kids come around for us this year. This bunch has probably worked harder with more heart than any crew I’ve had. These guys love the game and they come out to play. You have to drag them off the field. I’m proud of them and we’re looking forward to what we can do next year with all that we have coming back.”

Miller (16-6) loses Stallings, Drew Lewis and Rick Ma to graduation but will have eight returning juniors for the 2012 season.

Blessed Sacrament advances to play South Hampton in the semifinals. In the four quarterfinal games, three went to the lower seeded road teams with the three top ranked teams all falling. 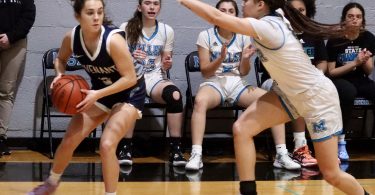 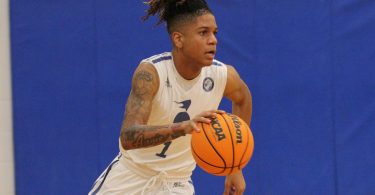 Blue Ridge’s boys basketball team always defines itself by its defense. And it’s in moments like...