The results made sense based on prior history and Nelson County’s trends. The Governors don’t lose at home, but whenever they play Dan River, they get a game. Both rang true in the Dogwood District quarterfinal clash between the two. Is was a tough day for base runners, but thanks to great hitting and pitching from Forrest Lipscomb, Nelson was able to advance, albeit after 10 innings with a 4-3 win on Monday.

“We’ve been in three 1-run game with these guys now,” said Nelson coach Scott McGarry. “We had to hang in there and battle, battle, battle. We made the plays defensively late. We weren’t the offensive team we wanted to be. Our key guys didn’t have a great day but other guys picked them up. That’s my message to them — how good it can feel when you believe in each other and that’s 21 out games. Today it was a 30 out game but we’ll take it.

Lipscomb threw eight innings for the Governors while also leading off in the lineup in the first with an triple, eventually scoring on a James Saunders single, but his hit in the tenth inning wound up being his shining moment.

“I felt pretty good at the plate today,” Lipscomb said. “I was hitting the ball pretty good earlier in the season. I came back from spring break and went 0 for 8 but the last three games I’ve been hitting real well. Today I saw the ball and put good swings on it.”

Tied at 3-3 going into the bottom of the 10th, the Governors got a much needed base runner with no outs when Warren Gillespie started the inning off with a single. Thanks to a sacrifice bunt from Trevor Martin and then a pop fly from Jake Mustain, Gillespie advanced to third base. With two outs, Lipscomb was able to punch through a single over the infield and bring the game to an end.

In a relatively low scoring game, the story outside of both starting pitchers quality outings was stranded base runners. Nelson had four different runners either picked off, thrown out or caught in rundowns, much to the chagrin of McGarry.

“I told the guys we can’t make mistakes like that,” McGarry said. “It wasn’t an end of the year game for us, but they didn’t know that. We’re in the region (playoffs) solidly but you still can’t do that.”

But Dan River had base running issues of its own, particularly in the fifth down 3-2. When Trent Tickle singled, he was able to take second base on an errant throw to first base a few plays later. Saunders hustled to retrieve the ball deep in foul territory and was puzzled to see Tickle being waved into the third. It was no easy play, but Saunders sent a rope to third base just in the nick of time.

“I thought the kid wasn’t going to go so I hesitated a bit, but if you’re going to try me, go ahead,” Saunders said.

Nelson saw its one-run lead earned in the first disappear in the third when the Wildcats had their best inning, getting three hits including an RBI double and RBI single to make it 2-1 in their favor.

The Governors reclaimed the lead in the fourth on RBI singles from Mustaing and Saunders. An inning and a half later though, Dan River tied the game at three on a double, single and sacrifice fly.

In the ninth, Nelson faced a serious threat with a leadoff double. At that point Jordan Wooten came on in relief. Dan River bunted the go ahead run over to third but Wooten was able to draw a pop fly to short to keep the runner locked down, then drew an inning ending ground out. In the 10th a leadoff walk and sacrifice bunt once again gave the Wildcats a runner in scoring position with less than two outs, but this time Mustain came through with two nice catches in left field on two hard hit balls.

That set the table for Gillespie and Lipscomb to close the game in the tenth.

“Gillespie had a heck of a game,” McGarry said. “He was just great.”

On the day, Lipscomb finished with a no decision but was 3 for 6 with an RBI. Saunders was 3 for 5 with a pair of RBI. Nelson Wooten was 2 for 4. Gillespie was 3 for 4 with two runs scored.

The Governors will host their DWD semifinal game against Gretna on Wednesday at 5 p.m. 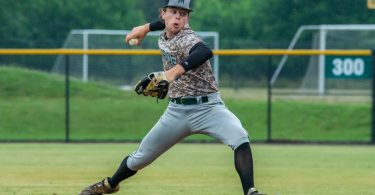 The 2022 All-State Class 3 baseball and softball teams are out and several local players picked up...