St. Anne’s-Belfield girls lacrosse’s defense had met the challenge, holding St. Catherine’s to just a single goal in the second half. But STAB needed one more play from the offense in the VISAA D1 quarterfinals.

They got it. Twice.

STAB scored the apparent gamewinner with four seconds to play but a stick check wiped the victory off the board and sent the game to overtime. That’s where freshman Martha Oakey hauled in a must-have draw control and then fellow freshman Mia Maurer finished for a 9-8 victory and a spot in the VISAA D1 state semifinals.

“I’m very proud of this young team to have so much poise at the end of a big game against a very talented and experienced St. Cat’s team,” said STAB coach Audrey Schreck. “Our girls executed on all ends of the field in the second half.”

Oakey finished with four goals for the Saints while also snagging three draw controls. Maurer totaled two goals and an assist including the game-winner. Addi Foster, Lellie King and Raleigh Foster had one goal each.

STAB had to bounce back from a frustrating LIS tournament semifinal loss to St. Catherine’s last week and then additionally had to overcome a slow first half that left STAB trailing 7-4 at the break.

“Our girls executed on all ends of the field in the second half,” Schreck said. “We did not start the game the way we wanted to, but we sure did finish it the way we wanted to. Our last game against them last week left a very bad taste in our mouths and we were hoping to see them again.”

Kelsey Perriello had seven saves in the cage for the Saints, a squad that has just one senior and leans heavily on an extremely talented group of young players still finding their footing at the varsity level under Schreck who’s in her first year as head coach after taking over for long-time sideline fixture Mary Blake.

“Big game and an even bigger win,” Schreck said. “I’m very proud of this young team to have so much poise at the end of a huge game against a very talented and experienced St. Cat’s team. But we’re not done yet.”

Definitely not done. STAB will take on No. 1-seeded St. Stephen’s & St. Agnes Friday at 4 p.m. in Midlothian in the state semifinals. 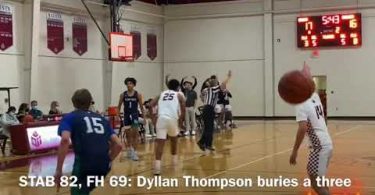