That’s easier said than done which is why, despite a Herculean 27-point effort by Monroe junior Jeff Early, the Dragons fell 80-65 in the 3A East Region quarterfinals Monday night against the Blue Devils.

“We’re really young and I’m really proud of our guys,” said Monroe coach Mike Maynard. “We made a couple of bad turnovers but if wasn’t for the last minute of the first half and the first two minutes of the third quarter it’s an even game.”

The Dragons managed to dictate the pace in the first quarter, which allowed Monroe to build a 16-11 lead after the opening frame. A pair of 3-pointers from Austin Batten and Keegan Woolford helped that early spurt, but Early was already getting into a groove.

“Coach Maynard had them prepared — he had a good game plan and we shot 4 for 18 and put them in the one-and-one early,” said Culpeper coach James Johnson. “We had to make some adjustments. We had no answer for Early.”

By halftime, Early had already scored 17 points, but a pair of crucial mistakes just before the break put Monroe in a five-point hole. The Dragons never recovered as Culpeper took the tempo up and Adrian Strother, Henry Butler, Anthony Ford and J.P. Gorby all got into a groove. Strother and Ford had 19 each to lead Culpeper while Butler had 11 and Gorby had 12. Luther Gibbs put together a strong stretch for the Blue Devils in the second quarter with seven points in the period.

“We actually make mistakes when we try to hold the ball so we just try and keep attacking,” Johnson said.

The Blue Devils were dominant out of the half in particular, turning their five-point lead into a 15-point advantage before the start of the fourth quarter.

“That’s Culpeper though, you’ve got to stop their spurts,” Maynard said.

Culpeper closed well down the stretch, missing just two free throws in the fourth quarter as Monroe tried to foul its way back into contention. The Blue Devils went 17 for 21 from the free-throw line.

“They made every free throw, I thought we’d have to start fouling their coach to see if he could make his free throws,” Maynard said.

The loss wraps up the basketball careers of two key seniors for the Drgaons, Austin Batten and Darion McKinnie. McKinnie is one of the area’s assist leaders this season while Batten has been a mainstay in the Dragons’ lineup for years. He had 16 in his final outing on the hardwood.

Anthony Terry chipped in 10 for Monroe. 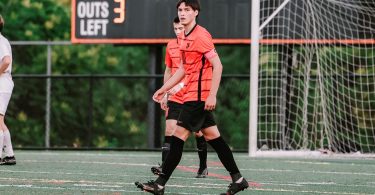