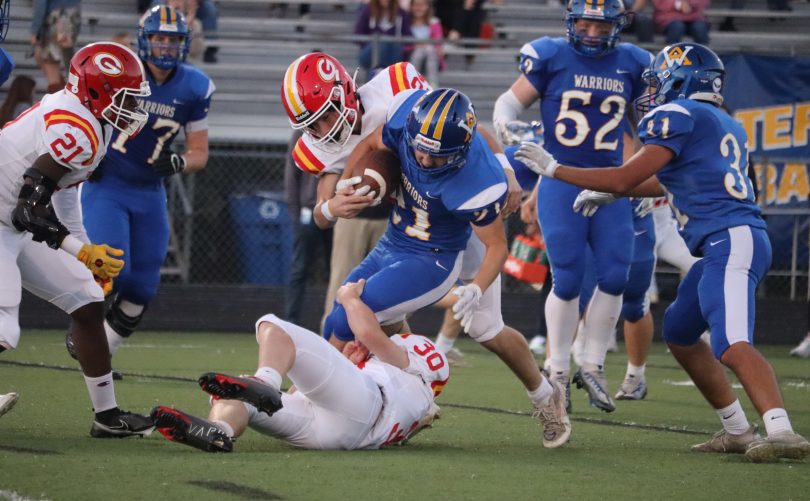 Western Albemarle was searching for an identity and they may have found it Friday night at home against Goochland.

There was nothing flashy about the Warriors’ 7-3 victory over Goochland as two teams that were in serious need of a victory engaged in a field positon tug-of-war where all the game’s scoring occurred in the first 15 minutes of the contest.

“I think we found our identity tonight as a defense — we found out that we’re grinders,” said Western’s Kyle Keyton

Western leaned on that grinding defense and a ground game powered by Keyton and Bubba Shifflett to get the job done a week after throwing four interceptions in a narrow loss to Turner Ashby. The defense in particular stepped up to push Goochland to an 0-4 record for the first time this century — Goochland last went winless in the first four back in 2000. Western held Goochland to just 158 total yards, with all but nine of that coming on the ground.

“We had spots where we looked good but when you’re the type of team we are, with a grind-it-out mentality on offense and we struggle for the big play, we’ve got to put together 10, 12 play drives,” Redmond said. “I thought Keyton ran really well there at the end to put it away and Bubba’s got the heart of a lion.”

The Warriors were fundamentally sound throughout defensively. They allowed just one 20-yard run but otherwise hemmed in Goochland and prevented any big plays. The front seven got solid efforts from Keyton, Tyler Spano, Grant Karczewski and Ross Bassett.

That group helped hold the Bulldogs in check most of the night despite a Herculean effort from Jameson Pryor who had to carry essentially the entire offensive load for Goochland. Pryor took carry after carry and made a lot of headway, but once Goochland reached the redzone, things continually unraveled.

“That’s the maddening thing about this year is that I think we’ve played a pretty physical brand of football and we’ve been able to move the ball,” said Goochland coach Alex Fruth. “But our biggest problem is the redzone, we’re like 2-for-9 in the redzone (coming into Friday). We have a mental block right now and we’ve got to learn how to push through.”

This one was really about two teams surviving each other rather than imposing their will.

The Warriors took a 7-0 lead on a Keyton plunge with 3:56 left in the first half after Shifflett and the Western offensive line put them in position for the score. But Goochland’s defense stiffened up after that with a strong effort from senior Deontae Quarles helping hold Western to just 184 total yards of offense.

“Defense played great, we’ve only given up eight points the whole year in the second half,” Fruth said. “We’re really banged up, we have kids who are out there who at the beginning of the year were third, maybe fourth string kids and they’ve stepped up. That’s the beauty of high school sports is that you ask those kids to answer the bell.”

After the 7-3 early exchange, the game was a series of short marches and punt-like situations — Goochland was actually down to its third-string long snapper and two errant snaps had already put the Bulldogs in precarious situations in the first half. So Goochland opted to let its star kicker Tyler Black “attempt” two nearly 60 yard field goals. In high school, if the field goal attempt breaks the plane it’s a touchback, so Black just hammered the ball low and away from a potential returner into the endzone and Western was again staring down an 80-yard march.

All that jockeying for field position couldn’t unseat the Warriors’ four-point lead though and Western got a major bounce back from its loss to Turner Ashby a week ago.

“We knew it was going to be a brawl coming into this game and we knew we were all going to play until the fourth quarter, until the last second,” Keyton said.