Less than 24 hours after taking down previously unbeaten E.C. Glass and avenging an early season loss, Charlottesville boys basketball did the exact same thing in a huge 76-47 win over Wilson Memorial.

Only a few weeks ago, Charlottesville fell at Wilson 45-35, missing multiple players due to sickness. Only one Black Knight, Keyshawn Hill, scored double figures that game.

Tuesday, the Black Knights completely flipped the script, scoring as much at halftime as they did the entire previous meeting.

Finding themselves knotted at seven early with the Green Hornets, Charlottesville used more of its signature, intense full court pressure to separate themselves. Sebastian Krebs, who hit multiple big shots in the upset win over EC Glass last night, hit a three as time expired to give Charlottesville a 17-10 lead after one.

However, Wilson quickly erased the deficit early in the 2nd. Finn Irving hit a three, then hit a tough turnaround jumper to cut the lead to two. Ethan Briseno knocked down two free throws to tie the game up at 17.

From there, Charlottesville got back to its game.

Charlottesville kept up the pressure in the third. Boyles nailed a three to start the quarter, and the Black Knight defense held Wilson to five points and pushed their lead to 18. Krebs and Aidan Yates knocked down some big fast break jumpers when Wilson tried to claw back in it and the Green Hornets couldn’t muster the offensive firepower to keep up.

Charlottesville then followed up its 26-point fourth quarter performance vs EC Glass with 28 points tonight to push the game far out of reach, sending Wilson Memorial (6-1) to their first loss in the start of an impressive season where the Green Hornets hold wins over Charlottesville and Spotswood. Promising Black Knight sophomore Luka Matic scored three straight buckets in the paint to close out the game.

The win for Charlottesville stretches their win streak to four after starting the season 0-3. Charlottesville has already avenged two of those losses, and Western Albemarle, the last team that beat them, remains later in the district schedule at home for CHS.

Keyshawn Hill is averaging 17.5 points per game in the win streak for Charlottesville. He led the Black Knights with 20 points. Aidan Yates chipped in 12 while being face-guarded all night. Polo Hill and Caldwell Boyles added 11 each, and Krebs notched 10 in the big win.

Charlottesville will take on Broad Run in the Daily Progress Hoops Classic on the 28th. 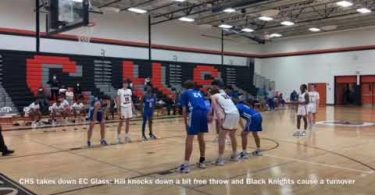 Charlottesville boys basketball is starting to hit their stride.    In their first game of the...