The Western Albemarle boys remained undefeated by playing lock down defense and hitting a barrage of threes in the 2nd and 3rd quarters to pull away from Stafford, 57-40 in Game 1 of this season’s Holiday Hoops Classic.

Western trailed 14-11 late in the 1st, but Luca Tesoriere nailed a three at the horn to tie things up. That started Western’s rain of treys that ultimately overwhelmed the Indians. Wes Gobble drained three triples alone in the period and Western built a 29-23 halftime lead.

From there, the Warriors locked down the Indians the rest of the way, holding them to 17 points in the 2nd half. Isaac Sumpter picked up the three point party in the 3rd and nailed a tough pull up jumper at the buzzer to end the third and put Western up 43-31.

Sumpter had 14 to lead Western, going four-for-seven from three. Josh Sime had 13 on 7 for 8 shooting and Wes Gobble chipped in 13 as well.

The Warriors (7-0) will pick back up tomorrow when they face Riverside at Charlottesville High at 11am.

The Albemarle boys looked poised to cruise to victory in Game 2 of the Classic. The Patriots played suffocating defense and Carter Wesson carried the load offensively in the 1st, nailing a deep trey at the horn to put Albemarle up 19-8 after one.

However, Riverside quickly got back into it. The Rams from Loudoun County put up 25 in the 2nd and held cut the lead to one with a minute left. The Patriots ended the half on a 5-0 run to take a 38-33 lead at the half, but Riverside stuck around.

After a back and forth third period that found Albemarle still up by six, Riverside got the lead to two at 67-65 with under two minutes remaining.

Riverside picked off a pass from Christian Humes had had a fast break with a chance to tie it up, but Humes deflected a Ram pass of his own and Jason Breen came up with the steal. La’Mari Parler then took it full length of the court and finished to give Albemarle some breathing room. The Patriots then made a huge stop on the other end, Breen knocked down another big free throw and Albemarle held on from there.

Albemarle moves to 6-1 on the year with a matchup with Broad Run (5-1) looming tomorrow at Charlottesville High. 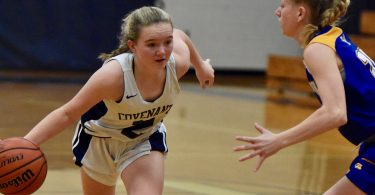 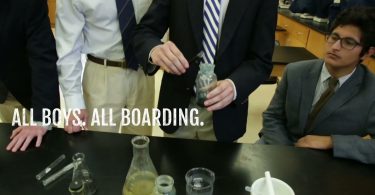