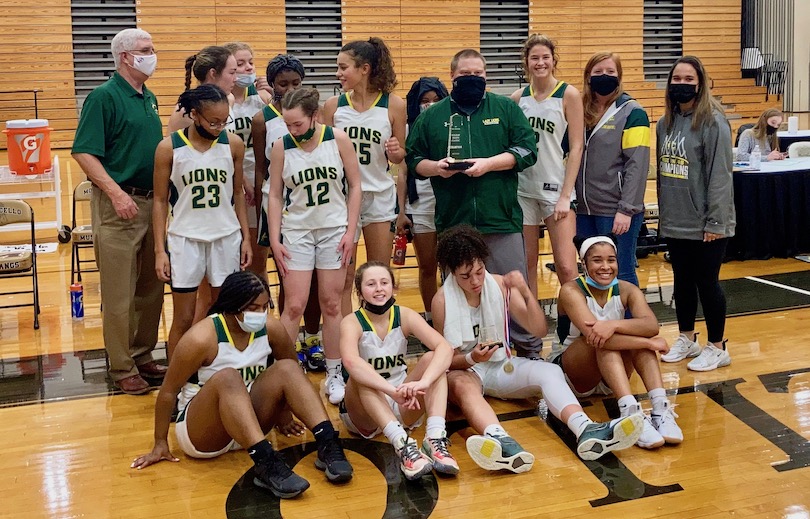 After finally getting Olivia McGhee back into the lineup, Louisa County had a great measuring stick opportunity in the Daily Progress Holiday Hoops Classic to end the year and see where the defending Class 4 state champions stood heading into 2022.

“Our goal every year is to play our best basketball at the end of the year.” Louisa County coach Nick Schreck said.

The Lions took a huge step in that direction, claiming the tournament crown over a talented young Covenant squad that entered the game 8-0.

The first half was a blaze — almost literally. The Eagles torched Louisa with five first half three pointers, an offensive attack spearheaded by eighth grader Kerrign Poindexter. The younger of the Poindexter sisters scored 15 in the first half.

The Lions jumped out to an early 10-4 lead and looked poised to cruise, but the Eagles quickly shot themselves back in it. Janie Smith scored a pair of buckets early and scored ten first half point of her own. Olivia McGhee hit a three off a crossover to push Louisa’s lead to its largest of the first half at six.

Reese Dalton hit a deep two and the elder Poindexter-Delaney-hit a three on the right wing to bring Covenant within one. Louisa scored down low but Kerrigan Poindexter calmly walked the ball up and drained a deep pull up three to pull Covenant even. Makayla Hargrove, who was named to the all tournament team-then found Kerrigan on the baseline for a three that put Covenant up 15-12 with under a minute left in the first. The Eagles led 15-14 at the end of the first, and it was clear Covenant came to play.

The Eagles already owned an impressive pair of victories over Western Albemarle, and the Eagles blitzed Class 5 Harrisonburg 60-28 yesterday to prove the young Eagles, who don’t have a single senior on the roster, belonged in the all public school tournament.

While the Poindexters cooled off in the second, Reese Dalton drained back-to-back treys to pull Covenant back even with the Lions after falling behind by six again.

The Lions took a slim 31-30 lead into the break and all the momentum seemed to be swinging towards the Eagles.

However, the Lions completely flipped the script in the second half.

“We had to be a little more intense on defense.” Schreck said about his second half adjustments. “We had to use our length to our advantage, they are very quick and very fundamentally sound…our goal was to run them off the three point line and make them shoot overtop of us.”

The Lions plan worked, surrendering only one field goal in the third — a banked three by Hargrove.

“We knew we had to pick up our defense, open threes were really killing us.” Louisa’s Sylvie Jackson said. “We all got together, agreed on it, and fixed it in the second half.”

Jackson scored eight of her 21 in the third and McGhee capped a 15-0 run to start the period that initially put the game out of reach.

Delaney Poindexter scored all six points for Covenant in the fourth, but the Lions locked everyone else down to seal the victory and the tournament championship.

Louisa outscored its opponents by 29, 15, and 25 respectively in its three tournament games that all started in McGhee’s return vs Charlottesville. The Lions are certainly rounding into form for a state title defense in 2022.

For Louisa, McGhee scored 22 and Jackson had 21. Janie Smith scored 12 and secured a number of big rebounds. The Lions will host Washington and Lee from Northern Virginia on January 3rd.

Sylvie Jackson was named to the all-tournament team and McGhee was named MVP.

“Just keep winning.” Jackson said of her team’s goals for the new year. 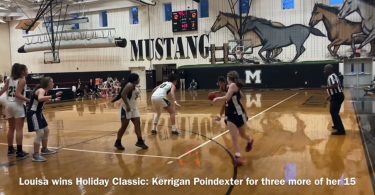 Covenant’s boys basketball team jumped out to a big lead early and cruised past Fuqua...